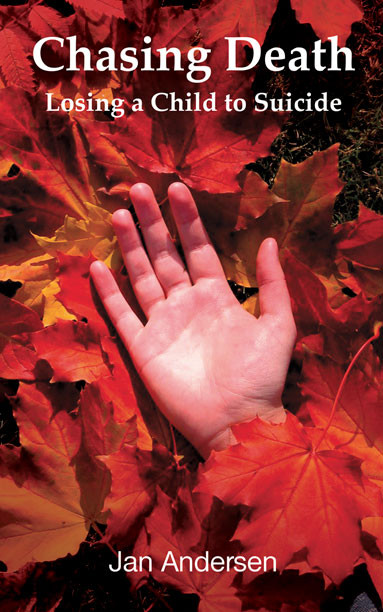 Chasing Death attempts to put candid, but heartrending words to the often incommunicable pain that families endure following the loss of a loved one to suicide.

On Halloween 2002, Jan Andersen’s 20-year-old son Kristian found a permanent solution to his misery. Suicide. He wrote two suicide notes, took an overdose of Heroin and passed away on Friday 1 November 2002. Chasing Death attempts to put candid, but heartrending words to the incommunicable pain that the surviving families endure, not only through the telling of Kristian’s story, but through the experiences of other families mourning the loss of a child, stepchild, grandchild, sibling, friend or relative to suicide.

Chasing Death was written over a period of six and a half years and covers topics within its 24 chapters that will not be found in other books on the topic. For example, the chapter on Bizarre Thoughts, Actions and Secrets covers the darkest and sometimes irrational thoughts and behaviours of a suicide survivor.

Although this book will break your heart, it will also provide solace to other child suicide grievers in knowing that their thoughts and feelings are normal and that they are not alone, in addition to being helpful to anyone who has lost a child or has been bereaved in any way. This book clearly demonstrates how debilitating the grief can be and how it can still cripple a survivor, ten, twenty, thirty and even forty years or more after the event.

The audience for Chasing Death extends beyond grieving families and those who deal with them and will provide a compelling, touching and enlightening read for anyone interested in emotional true life stories. It will also help people respond with greater understanding and sensitivity to the surviving families’ grief.

When Will My Pain Stop